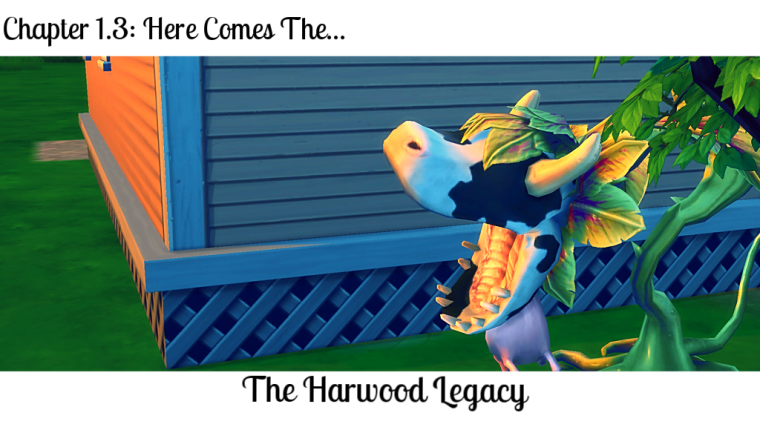 Last time there were multiple birthdays. Malachite finished his Leader of the Pack aspiration and is now working towards Soulmate. Both Garnet and Malachite grew up their significant other; in Garnet’s case her hopeful significant other. Pearl tried calling the aliens but none have shown up yet (keep your fingers crossed). Paolo turned into an elder and Pearl grew a cowplant!

Let’s start off the chapter with these two adorable sims. Malachite asked Peyton on a date to celebrate both of their birthdays. 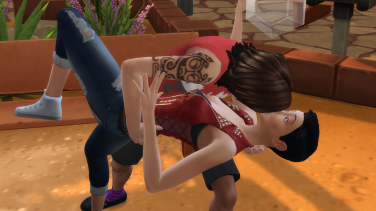 Oh and I did give Mal a tattoo. I figured I’d give one to all the heirs.

Mal:” So I know this probably isn’t much of a surprise, since we are promised to each other and all, but would you like to share the rest of your life with me?” Peyton: ” …the ring is of a lovely quality. Of course I say yes! Love you forever and always. I mean my jealousy trait might be hard to deal with but as long as you don’t cheat I think we will be fine.” Back at home things got awkward.

Paolo: “I’ve managed to live most of my life without too many awkward occurrences happening. Why does the string of luck have to run out now that I’m in my twilight years?” I haven’t gotten Mal a job yet because I haven’t decided on what career he should take so in the mean time he’s painting to help out the family income.

Garnet and Myron have a very successful date at the ruins.

Myron: ” Okay I’ll take a dip but then I’m getting right out ’cause the water doesn’t look all that sanitary.”

Garnet: “Oh come on live a little My.”

Myron:”I’m living plenty what with woohoo in the bushes , which by the way I think I have a twig in my pants, and now I’m taking a dip in something that looks like it carries the plague.”

Myron: “Garnet why are you in the bushes…oh…are you…”
Garnet: “Proposing? Yes although I do admit I could have picked a better spot. Myron, though you are squeamish,which annoys me, I also love you for it. I know how much you care for my health and happiness. I want to spend the rest of my life with you. What do you say?”

Myron: “Yes of course. Though your sense of adventure might lead me to an early grave I can’t imagine my life without you.”

Back at the house Garnet learns that she is expecting a little nooboo. And she looks absolutely smug about it.

Garnet: “Guess what Honey?! We’re having a baby!” 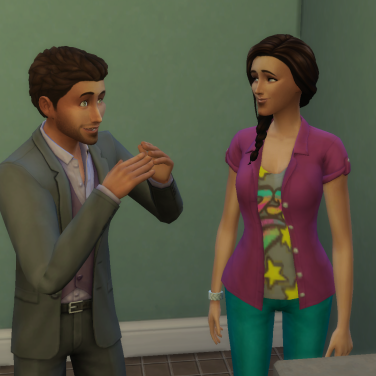 Myron: “Um…I’m not quite sure how I should feel about this, but I’ll go with mostly happy! Just promise we won’t have too many kids they’re rather unsanitary.”

Garnet: “You do realize that the whole process of making kids is unsanitary.”

Myron: *blushes* “But that part is fun…so I don’t mind it so much.”

Garnet wished for an arch so I obliged her. Garnet and Myron had a quick elopement. I really dread having parties, both IRL and ingame, and I also wanted an heir to have the first wedding party. But that doesn’t mean I can’t dress Garnet in a pretty dress.

Myron is the first to officially meet our first cow plant! It was just a little seedling this morning, but now look at her! I think I will name her Betsy. Although I wish your sims could actually name their cow plants in the game.

I finally broke down and got a computer. Pearl is still hard at work in the science career. If the family didn’t need the money I would have her quit a focus on her gardening skill, because that’s all she needs to complete her aspiration.

Back on the home front Garnet isn’t having fun with her pregnancy. Although to be perfectly honest she’s generally pretty happy except for morning sickness.

Garnet spends her time leveling up in the violin skill for her aspiration.

Pearl and Mal seem to be enjoying the tunes she’s putting out even though she is a level 4. It must be because she is a creative sim. And of course Garnet isn’t going to let her pregnancy stop her from enjoying a good workout. Pearl’s birthday came around and I let it slip by me. I’ve been so focused on getting Mal and Garnet’s relationships and aspirations in order that I forgot about poor Pearl :(.

Myron: ” Oooooohhhhh…Cake. Don’t mind if I do!”

Myron: “Ok Betsy you win; let’s not do this again shall we?”

Pearl: “Hmmm…I wonder what this could be?” Garnet: “I wonder what that burning smell could be?” 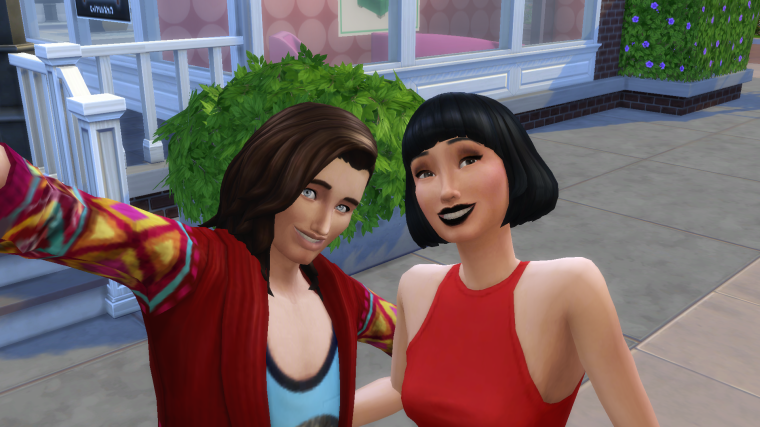 Mal asked Peyton out on a date, but first I went into manage worlds and gave her a makeover.

Pretty soon it’s time for Garnet to pop out this baby. And of course Myron is having a major melt down. 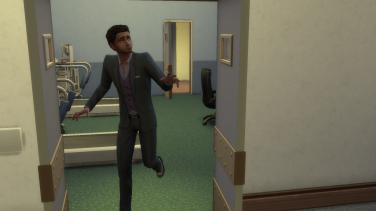 Myron: “No! I’m not ready to be a father! I need a snack…low blood sugar and all.”

Due to Myron not being able to handle his sh*t, Garnet gave birth to their daughter Ruby all by herself.

Myron: “I sense that my child is born, this makes me happy.”

Garnet: ” Don’t worry honey, your father is just a little squeamish but he loves you very much.”

Back at home Garnet ages Ruby up. Ruby ages up into the exact hair and clothing as Garnet did, it’s a bit erie.

Ruby rolled the Geek trait with the artistic prodigy aspiration. She has her mother and grandmother’s eye color. And after she aged up her and her parents moved out of the legacy house. I will miss having Garnet around, but I’m excited to see Mal and Peyton’s kids!

Kunzite received the athletic trait. His other traits are Cheerful and Goofball. And speaking of future wife let’s make it official. Family and friends gathered around to witness the couple get married. Mal: ” Now that the guests have gone why don’t we celebrate!”

Peyton: “Darling just promise to leave the bow tie on!”

This pose can only mean one thing! Peyton: “Honey I have something important to tell you so can you please get your hand out of my crotch area!”

Mal: “Well I am a total stud after all.” 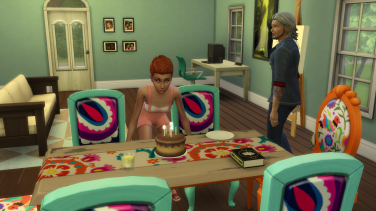 Madelyn Hartley comes over and she and Kunzite become best friends. We also give her a quick birthday.

Kunzite waists no time wooing his love. And they quickly become engaged. 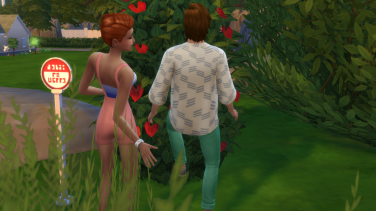 Madelyn: “Get your sexy but in there!”

And a quick elopement.

And another nooboo is on its way! I will skip the pictures where Madelyn tells Kunzite about their impending parenthood as Kunzite has the same reaction Mal and Myron had.