Last time we saw the Harwoods they were expanding their vet clinic. Malin aged up into a cute toddler. Catarina gave birth to Percival while Malone took a nap. We had our first pet fatality, Doc. And then Grim paid us another visit at took Malachite to the afterlife.

I just wanted to show that Paolo was the world’s best grandpa! I love how the parenthood pack (or was it an update) gives more info on familial relationships.

Well enough of that it’s time to celebrate Malcolm’s birthday!

And here he is the handsome devil! I love how he turned out. I think he is the best combination of his parents. Anyway his traits are Romantic, Insider, and Snob. His aspiration is Angler. 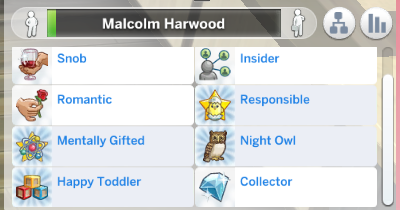 Here are all of Malcolm’s traits.

And during Malcolm’s birthday Percival aged up into a toddler. Percival has the wild trait. I’m so happy he has his mom’s red hair! With this hair style he kind of looks like Chucky from the Rugrats cartoon.

Eeep! Toddlers! It’s a little strange to think that Malin is Percival’s aunt. I got the Harwoods a Roomba (don’t remember what they’re called in game) so that they’re not constantly having to pick up pet hair. But what’s even better is that Cleo will ride the Roomba when it’s moving.

Malcolm teaching his sister some skills. Percy decided to run around in his birthday suit! First time one of my toddlers decided to do that! I just love his expression too!

Percy: That’s the best thing ever!

I forget what was on the card, but his face is just too precious!

So I invited the sim Malone was trying to set Malcom up with and we aged her up. Her name is Marion Bheeda.

They went on a date which wasn’t hugely successful. I think Malcolm was still sad from his dad’s passing. But I have hope! I feel a little bad for Cleo because between two toddlers and managing Malone and Catarina’s aspiration she doesn’t get a whole lot of attention. Living room up date! I’m pretty pleased with how the house is coming together.

Catarina: You know, this fish tank has got me a little frisky. What do you say we get a little more frisky in the bedroom!

Well we have another nooboo on the way!

So I moved Malcolm out of the house cause I figured I’d let the master command mod do it’s thing. I moved Mallory in as well and now Peyton is visiting to see how her kiddos are doing. Mallory: It’s pretty nice, but it only has one room. We’re going to have to turn the study into a bedroom.

Peyton: Wow only one bedroom! This house seemed so much bigger.

Peyton also visited Malia but she wasn’t at home.

Since Mallory’s other portrait was a medium size I invited her over to take another picture.

Malcolm also has a portrait now.

Percival asked his uncle Malcolm to read him a story. Malin is a Whiz Kid and active. Somehow she skipped having her father’s lazy trait and inherited her grandfather’s active trait.

Malcolm invited Malone out to bear night, which was the perfect opportunity for Malone to practice his mischief skill. The two brother’s did catch up on old times as well. Malone didn’t stay too long at the bar because he get’s super tense around bears apparently. I thought I took a picture of his moodlet, but alas I didn’t. 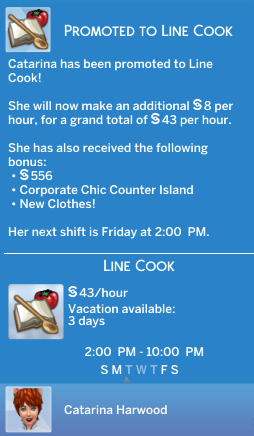 While her husband was out at the bar Catarina got herself a promotion!

I got a notification that Paolo’s spirit was fading away, so I took the opportunity to strengthen all of the ghosts spirits. And then I locked the mausoleum doors so the family doesn’t spend all their time crying. So you know how I said I would let the master command mod do it’s thing, well I was too impatient so I had Malcolm and Marion get married. But I promise I won’t interfere again!

While Catarina was practicing her mixology skill she went into labor! I sent her to the hospital alone.

Why you ask? Because Malone was helping Malin with her homework. Though Malone did queue up an action to go to the hospital. Malone watching his wife teach his son some valuable lessons.

Malone invited this guy over to practice his mischief skill on only to have it backfire on him.

And with that Malone reached level 10 of the mischief skill and completed his aspiration! He is now working on successful lineage.

I decided to get spa day and I’m so glad I did! Peyton: I’m comig my love. I will see you soon! Peyton is survived by Five children:  Malia, Mallory, Malone, Malcolm, and Malin (yes I’m including Malin as one of hers). And two grandchildren: Percival and Scanlan. 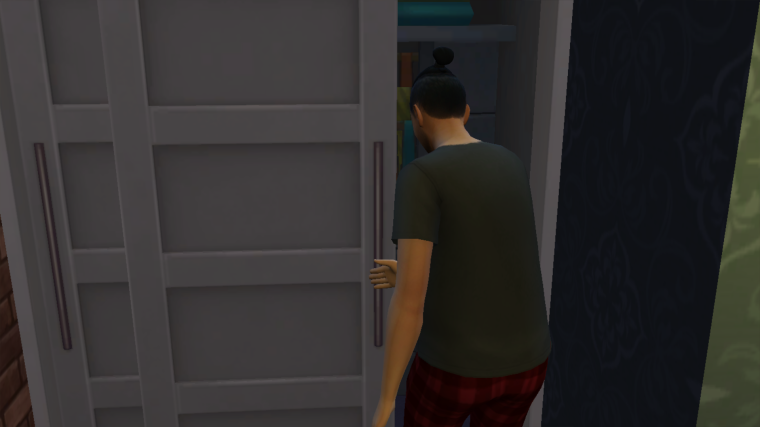 Malone took the death of his mother particularly hard. Not that he wasn’t sad at losing his dad, but he seemed more downcast at losing his mother. Maybe it’s because both of his parents are gone now. And we have success! Malone looks very pleased with himself. 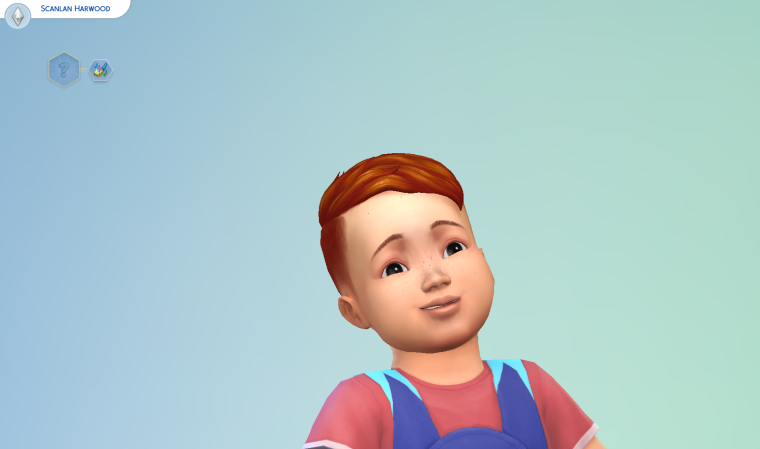 And Scanlan aged up! He has the silly trait. And I was surprised again at the red hair! With Malon’s black hair I wasn’t sure we would get any redheaded children and now we have two! Scanlan looks exactly like Percival, I hope it’s just as toddlers and as they age up their faces will look different. This pregnancy is harder on Catarina. She didn’t throw up at all during her last two pregnancies.

Percival is a social butterfly with the outgoing trait. I forgot last chapter to mention who he was named after so I’ll do that now. He’s named after Percival Fredrickstein Von Musel Klossowski de Rolo III, the human gunslinger from Critical Role.

And I will leave you with a look at the updated boy’s bedroom.