We start off the chapter with Percy working his magic at the vet clinic. The clinic also gets a little makeover.

To help with the dreaded social aspiration Georgiana starts a club.

These are two of the three children she is going to befriend. The boy in the red coat is Jeffery and the girl in the brown coat is Nicole. While Jeffrey and Marjorie look on enviously. 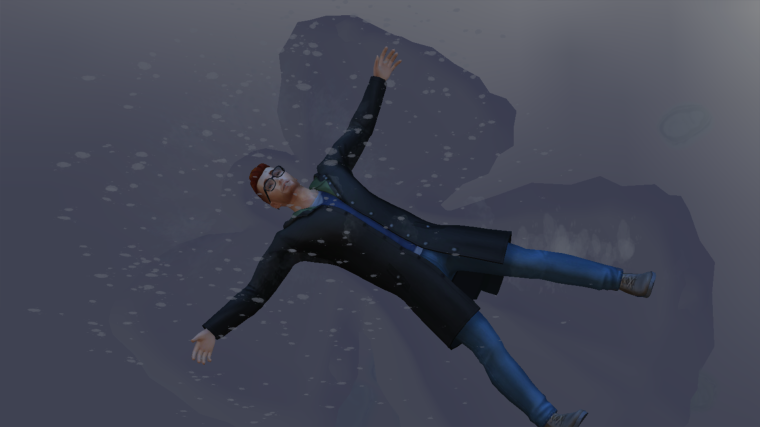 Percy is still a kid at heart.

All of Harmony’s hard work has paid off, she is now level 10 in the piano skill. Vex is still improving her mixology skill, but she is close to completing it!

Percy has to make a new cake since the other one spoiled. 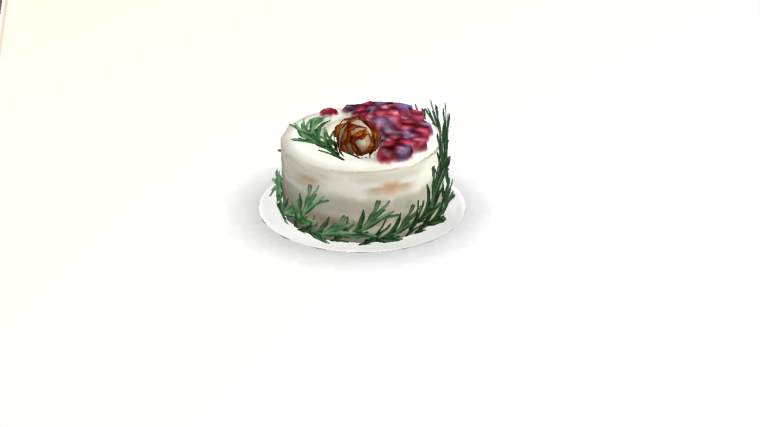 Look at this beauty. It’s a winter cake must be new with the holiday updates.

And the reason for the cake is it’s Darcy and Frederick’s birthdays! First up is Darcy.

Then Frederick gets his turn. By the way; the boy in the yellow coat is a distant cousin Magnus Hartley. I do have the family tree updated so you can see where on the family tree he comes from.

Darcy lookin’ good! He is now a Music Lover like his mom and his aspiration is Computer Whiz. 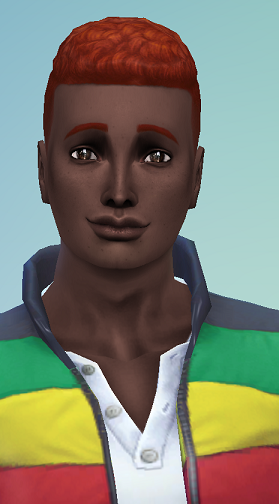 And Frederick already looks like he’s an adult already! Frederick adds Genius to his traits and wants to be an Outdoor Enthusiast.

Gigi works on becoming friends with Jeffery next. 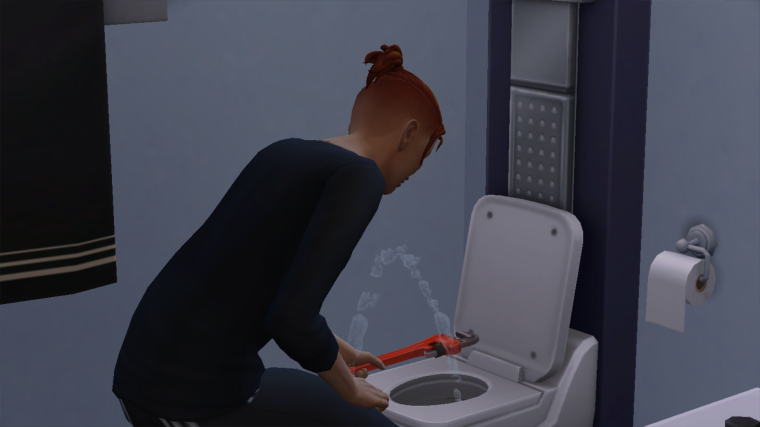 Darcy needs three more badges to become a llamacorn scout, so he’s working on his civic responsibility badge by going around the house repairing and cleaning.

Darcy decided all on his own to start boxing. He is a bit of a string bean compared to his dad and even his cousin Frederick. 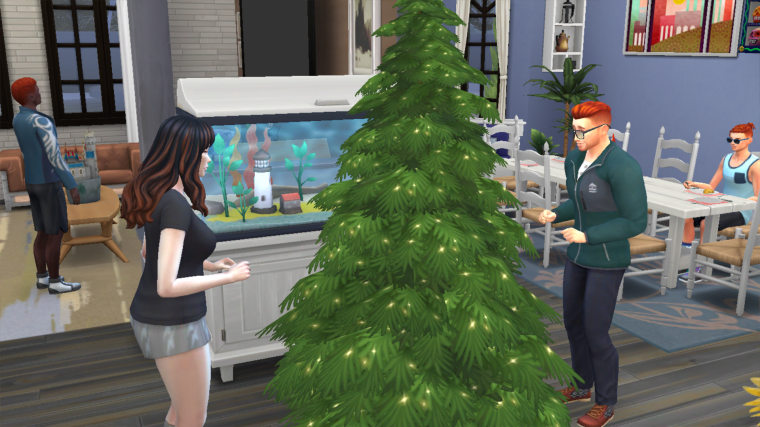 Winterfest is upon us once again.

Percy roasting a Tofurkey. Harmony is the only vegetarian in the family.

Vax came by for a visit! Which reminds me I should invite Scanlan over too. We haven’t seen him in a while.

Georgiana being the good friend she is gives out presents.

Georgiana and Nicole build a punk rock snowpal. Gigi is behind the snowpal in the second picture, but she is there. 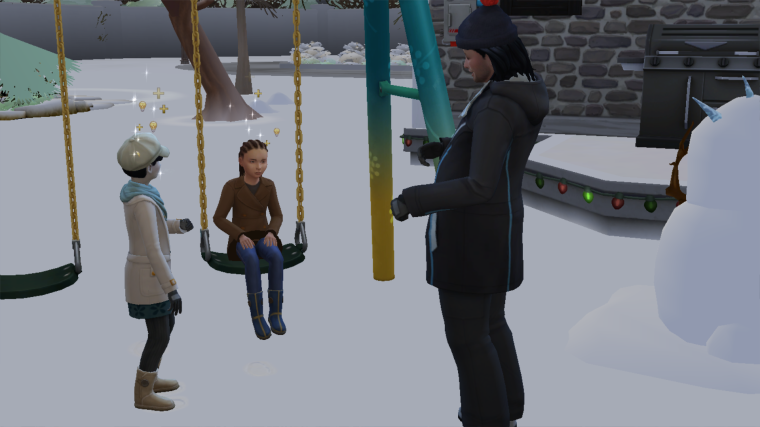 Frederick invited his dad, Hector, over for Winterfest.

And Vex gave him a present. They did autonomously get a little flirty but nothing too serious. And Vex never rolls wishes to call him. Since Jester died I could move Hector in but I just don’t get a good couple sense from them. A little cheek kiss nothing more.

The Gnomes have invaded our garden with seed packets! It took me forever to sell them. 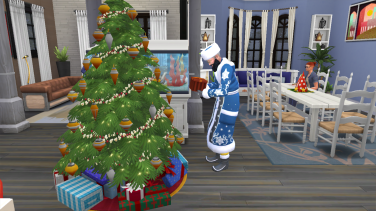 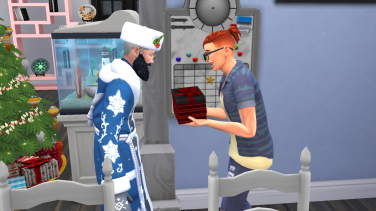 Father Winter came for a visit. I find the beard suspect. Father Winter gave Darcy plumbing parts, which makes sense I guess since he has been repairing objects around the house.

Frederick got the future cube. How dare Father Winter say Frederick was on the naughty list!

This is the stuff of nightmares! I went to get a close up of Fredericks face and got Father Winter’s teeth instead. There this is much better. This is the face of a sim fighting to be happy with his present. 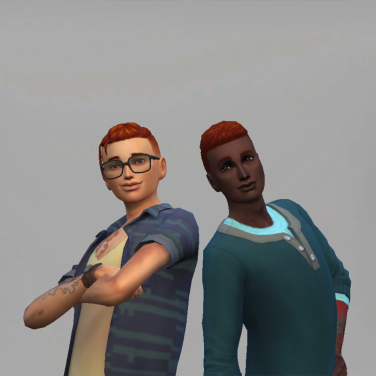 Photo shoot! These two are just so handsome!

Darcy working on getting that Outdoor Activities badge. 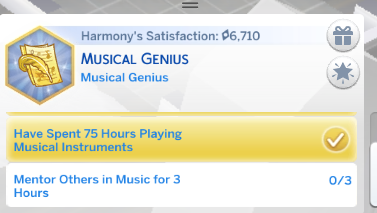 Harmony is now one her last milestone.

Paolo and Pearl came by for a visit. Vex was practicing making drinks and set the bar on fire! Luckily the sprinkler system went off as everyone in the house was more interested in running around like maniacs than putting out the fire.

One of the presents was a tv, I sold it, but it gave me an idea to do a game room in the basement.

Harmony teaches Percy a thing or two about playing the piano.

We got a new bar for Vex.

And with that she also has completed her aspiration! 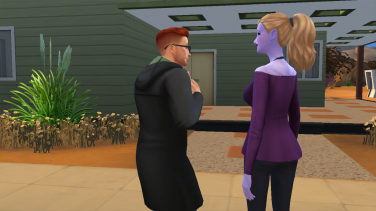 Percy’s Aunt Malin invited him over for a visit. I sometimes forget that Percy and Malin were raised together. The house Malin was in was unfurnished so I went into managed worlds and gave her a furnished house. She also had another son.

Harmony’s new aspiration is Fabulously Wealthy and Vex has Bodybuilder. Oh the trials and tribulations of a new aspiration. At least her twin was there for support.

Back at home it was Vex’s birthday. And look Scanlan came by for a visit!

Darcy meets his Uncle for the first time. 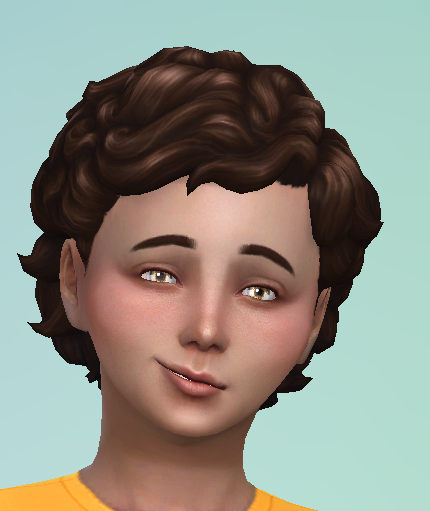 Magnus Hartley is the great grandson to Pearl.

Cullen Kennedy, son to Cian and grandson of Mallory Harwood.

Scanlan’s daughter Kaylie. She looks a lot like her grandma Catarina.