Recap Time! Last update the Harwoods moved into a new house. Jane got a new hairstyle. Bill was born. Ginny is now a child and the Harwoods added twins to the family. The twins were originally named Charlie and Percy but I have since decided to name them Fred and George as it was too serendipitous to pass up! Vex: Frederick dear we would like you to have the key to the house. Visit anytime you like. Your old mom would like to see more of you.

Georgiana also came over to meet her new nephews!

Also no matter which way I went with the twins names they have a relative with the same/similar name. If I went with Charlie and Percy one of  the twins would have the same name as their grandfather Percival. But now we have Fred (Frederick) and George (Georgiana). We met Fredericks wife a couple of chapters ago but I had forgotten her name. Her name is Christina and she is quite a bit older than her husband.

These aliens can’t get enough of Vex!

It’s not only Bill’s birthday but the twins as well! 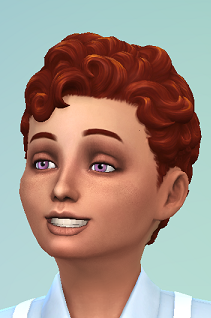 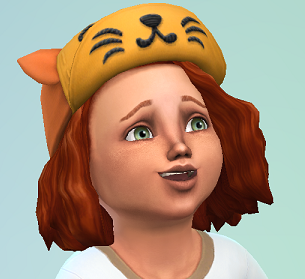 Bill is a Vegetarian Whiz Kid while Fred (top Right) is a Charmer like sister Ginny was and George (bottom) is Independent. The twins, I believe, are identical as far as I can tell.

The house came with a walk in closet off the master bathroom and while a nice decoration feature to the house, not very useful so I made it into the twins room. Darcy tired from a long hard days work comes home with a promotion to Fourth Lieutenant.

Aunt Georgiana came for another visit and Bill ropes her into a game of chess working on his first milestion.

At this point Georgiana got married to a sim named Gabriel Srivastava. His mother on the other hand doesn’t play fair.

Alison: Life isn’t fair the sooner he learns this lesson the better prepared he will be. I found this really funny. Percy came in to play on the computer then his father and Grandmother Catrina came for a visit and it looks like Darcy is having a business meeting with them. 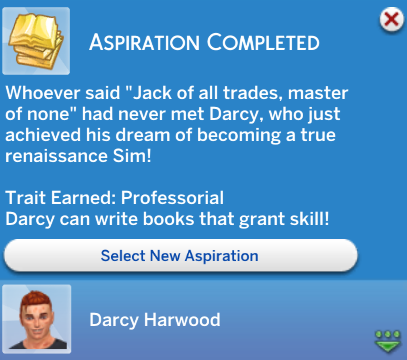 Darcy completed his aspiration! He is now working on Nerd Brain.

It’s a potty party! Also I need more lights in this room.

Frederick came by for a visit and ended up fixing one of the shower stall broken by one of the ghosts. Also his wife Christina just died.

Woooooooo Jane’s birthday! I love her but the full house is driving me up a wall!

Jane added Creative to her traits. Her other traits are Outgoing and Geek. She finished her Fabulously Wealthy aspiration. I gave her Painter Extraordinaire before she left.

Alison: You can do it George! I believe in you!

George is level 2 potty. Also Alison got a makeover. 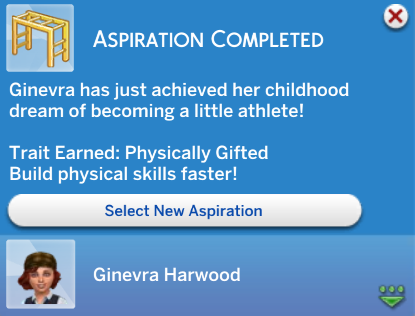 Ginny completed her aspiration and still has 8 days till she is a teen so I gave her the Artistic Prodigy aspiration.

The twins work on their movement skill, at different times of course, but both times were during a thunderstorm.

This man looks really good in a uniform!

These two decide to have some sexy fun times. Risky is on so hopefully I don’t regret it.

Ginny completes her first milestone for her second aspiration. It has been a while since I played with the Vet clinic so I decided to sell it.

Alison needs 20 friends and before she went to the library she had 15/20. With a few Cheerful intros she easily got the rest. Now she just needs a BFF, which she is best friends with Darcy but it’s not retroactively counting him :(, and level 10 charisma. She does however become best friends with Bill. Which knocks Darcy out but maybe I will have them become besties again.

I will end the chapter here but there is a few family updates if you want to stick around. 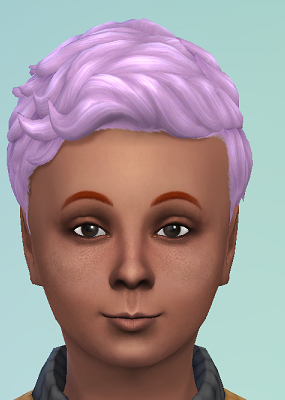